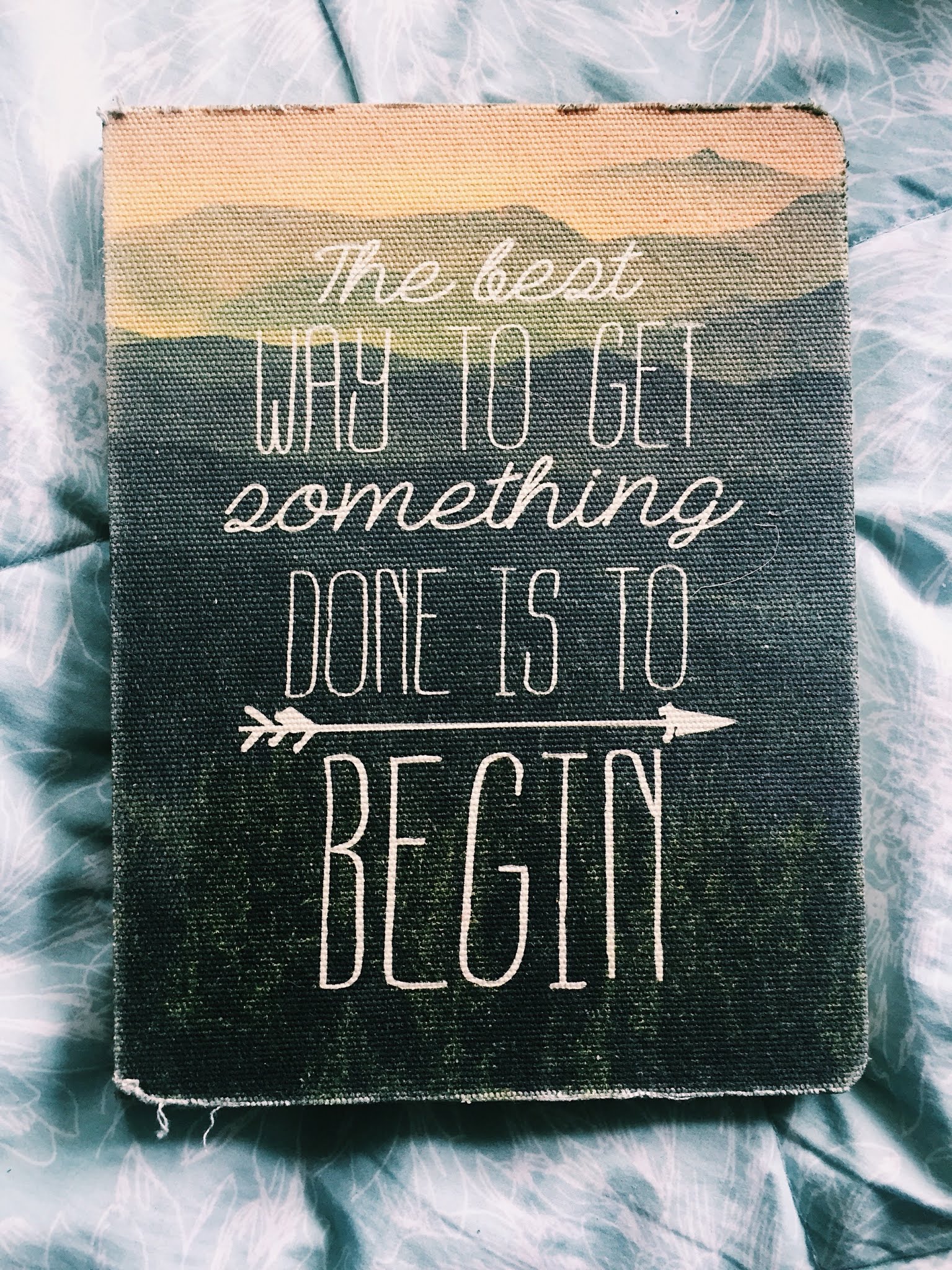 I’ve been staring at the cover of my notebook since October of 2017 but only now am I starting to realize the implications, the depth, the truth of the message emblazoned on the front of the binding.

I’ve been sitting on ideas for a post like this for about a week now, and I thought I’d take the cover’s advice, right now, while I have the time to make this post.

“The best way to get something done is to begin.“

God, I wrote earlier in my relaxed stupor that was last night, has a strange way of teaching us things. And I stand by that. A few weeks ago, I was pointed to an online community full of like-minded self-starting personalities like my own. This introduction led me to take a personality test, which reinforced my knowledge that I am an ENFP-T, through and through. I don’t like mundane routines, I try too hard to please, I’m fiercely ambitious, I hate asking for help, and I’m also a bit scatterbrained. This started a chain reaction of mini-discoveries, mostly ones about myself, some about other people.

And then just this weekend, I was gifted with a conversation from a local mom, who I would not have run into otherwise had I not taken my sister to her all-star [and final] baseball game. I’m not sure how the conversation got started, but we got to talking about life and health and then it clicked– we found that we both despised small talk, we were both in the ENF[J/P] range, and she touched on her experiences living with anxiety and bipolar disorder. All of the sudden I found myself relating.

A few days earlier, I had essentially stepped outside of myself. Things were not going well, I could feel things falling apart, my monthly episode of trains running off their rails and being paralyzed by indecision had come at a really inconvenient time for me, so I had to step back from a lot of things and just take a weekend to rest and re-charge.

I have yet to get multiple opinions [and I plan on doing so] but I came to the conclusion that I’d been avoiding and ignoring something for a bit too long, and a 15 minute exchange of ideas and experiences transformed into the first step of realization. I shared with this baseball mom my concerns, I told her about my research, my screening, my findings, and the helpful and supportive information that followed was absolutely incredible. This mother has since conquered her identity, and has a website and LLC completely devoted to helping others do the same.

And looking at the words on this notebook today I realize I’ve had so many beginnings in the past two weeks.

I began, again here, in this space, having sorted out the old posts and the old angst and the old everything, and tried to tidy it up for more, for growth.

I began a new habit of letting go, of not obsessing or returning to things [people, rather] that would only be a form of destructive restraint going forward.

I began investing myself in the research of my passion projects, re-designing my craft blog and doing my best to create new work every week.

I began the process [which, as it turns out, I started months ago but never finished??] of setting up an Etsy shop for said craft blog, and I put my first product into production yesterday.

During the period of heavy doubt, peak uneasiness and discomfort, deadened optimism and flat out de-motivation… it was so hard to begin. Beginning seemed like a crazy afterthought, something so distant from the comforting idea that I was fine where I was, that I was fine shrinking back. I was confronted with these words:

“There is a saying, ‘the obstacle is the way.’ Sometimes we have to change our expectations and way of thinking to go head first towards the obstacle or difficult path instead of trying to avoid it or get rid of it.”

When I heard this I had to stop for a minute because it was so true. So often I think we find ourselves running, so much of our culture and habits are escapist, “buy this, be happier,” “go here, be happier, find yourself”, “do this instead of that”…when sometimes the best remedy is to stand your ground and fight right where we are.

And I’m trying to do just that, fight right where I am, make a “to-do” list of the problems and watch myself tackle them head on, crossing them off mentally, knowing I can win, knowing that I’ll be stronger and more fulfilled on the other side.

Some beginnings like the ones above, were deceptively hard.

But they make room for new ones that will flourish.