What an exhausting day.

Woke up entirely too early, ate a breakfast, and then hit the road to go to Myakka River State Park, where we were scheduled to take a canopy tour.
For those people who like hiking through the woods, it was a similar experience, except the mud/mulch/twig trail was replaced by a light colored silt, and the pines were replaced by palms and various other tropical plants. Halfway through the wall we stumbled across a wooden tower, which, if you climbed its 6 or some-odd stories, you could see over all of the tropical greenery for miles. However to get to the tower, we had to walk through some rain water and then cross a narrow wobbly bridge.
So worth it. 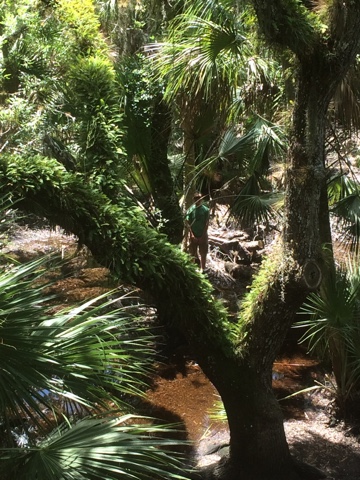 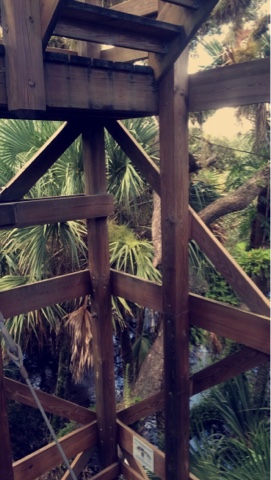 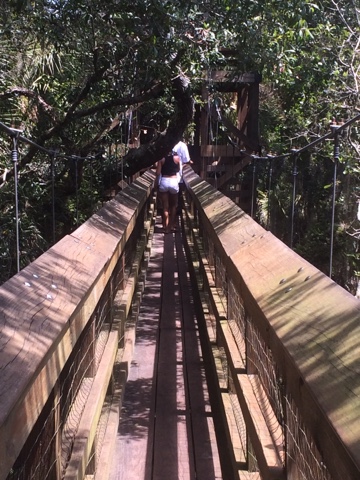 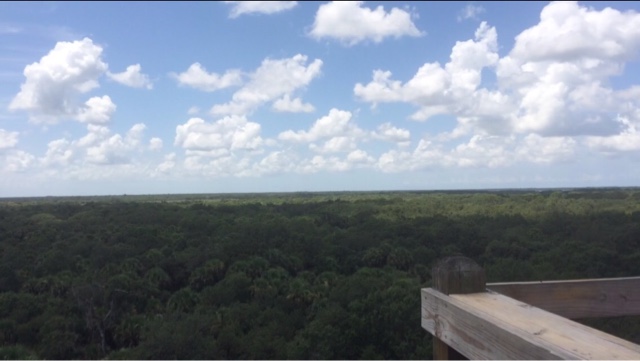 After our trek through the palms, we opted for a boat tour across the Myakka River, which sprawled for miles before us, but was only 5 feet deep at its deepest point.
The man giving our boat tour was like a nerdy-botanist-grandfather-Santa, with the right amount of fact and fun.
It was on this tour that I learned facts about alligators and other wildlife that I’d never heard before.
For example: *clears throat*
-You cannot determine the sex of an aligator in the daytime. However, because their eyes reflect light at night (like cats), you can see that females eyes appear yellow and the eyes of a male appear red (so next time you’re in a gator infested place and you wanna shine a light around and see what color eyes you come across, you can identify them by gender!)
-Alligators have sensors that detect water vibrations (independent of all facial orifices) and help them identify where their food is.
-Gators are canniballistic
-Gators can navigate based on the stars (scientifically proven, out tour guide said…!)
-Alligators are opportunists and hunt mostly at night, while remaining mostly hidden and in the shade during the day
-According to our tour guide, you can measure a gator’s snout in inches, and whatever number that is, that’s how long the gator is in feet (a gator with a 6 inch about will be around 6 ft. long).
-Gators in Myakka mate in April and May
-Gators slap their jaws in water to be territorial (mostly done by males).
-Gators, like most other animals, are polygamous.
– According to our tour guide, running in a zig zag pattern doesn’t really help you get away faster
-Gators have 6 distinct mating calls: one of which that sounds like a lawnmower, and a throaty roar (tail comes out, mouth opens and it sounds like a dinosaur roar).  Our tourguide’ impression of the gator roar was rather spot on, actually.
-Female gators stomp out a ten foot circle, in which they lay between 15-20 eggs (each season!), and they start hatching around Labor Day.
-The sex of a gator is determined 21 days into incubation period, by the temperature of the eggs. Eggs with males inside are hotter than the eggs containing females. In fact, 5 out of 6 eggs that actually hatch are females, mostly because hot male eggs taste better, and get eaten by other animals.
– 3 out of 100 hatched alligators will make to breeding age, mostly due to the vulnerability of baby alligators and the tendency of hungry predators to prey on them
– there are around 1.3 million alligators in FL and 2 million Louisiana
-the gator is a Keystone species in Mayakka– meaning that if the alligator goes extinct, it affects all of the other species in the habitat. And the gators keep the balance in the ecosystem.
-Other keystone species in Myakka: gopher tortise (endangered) (digs tunnels under ground, creates homes for other animals) and Indigo snakes (also endangered), which are HUGE but not poisonous; (they don’t constrict their prey, they just eat other snakes, and they live with the gopher tortoise!
Whew
Sorry to just spew facts at you… I just found them interesting.
After our boat tour (sorry, no alligator pics

I had an aisle seat and it was super hot so the ones we did see quickly submerged themselves into the water seconds after they were pointed out) we headed to fuel our hunger at a restaurant in Siesta Village called “The Hub”, a tropical, pan-Latin/baja cuisine with “the best margaritas in town”. 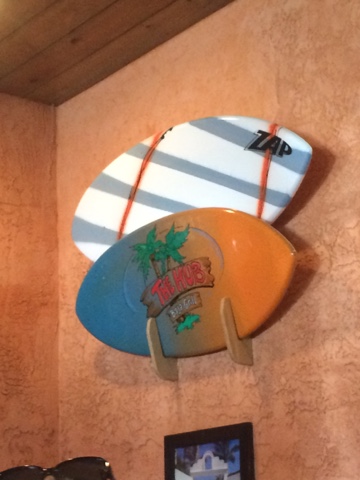 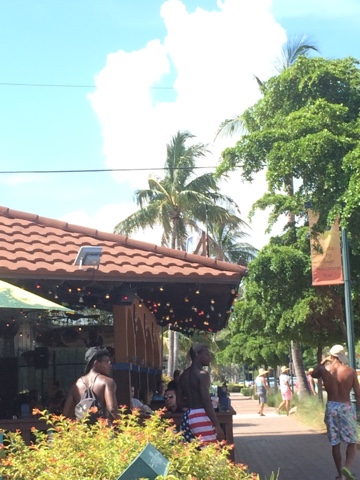 After fueling up, we made our way down to the Siesta Key beach, a beach with 99% quartz sand, which, unlike the dead coral of other beach sand, stays cool on your feet (even in 99 degree weather like we had!). The water was so clear and blue, and so _warm_!!
Like
Normally I get in the water to cool down, only to complain seconds after submerging my feet that “it’s freezing!”
Siesta Key water, however, is one hell of an exception. You walk in, and it’s like wading in a hot tub with the waves replacing the bubbles of the jets. And it was so _salty_! Normally, I wouldn’t mind getting ocean water in my nose/mouth/eye… But the amount of salt in that water was crazy.  One upside, however, was the calmness of the water, and how I was able to wear my sunglasses in the sparkling blue without having to worry about rogue waves snatching them away. 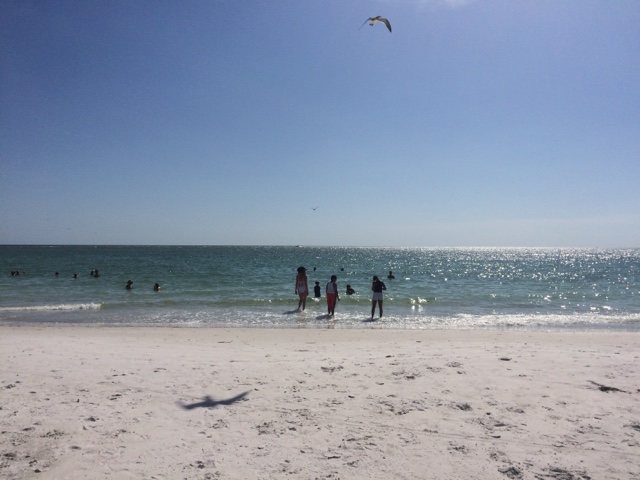 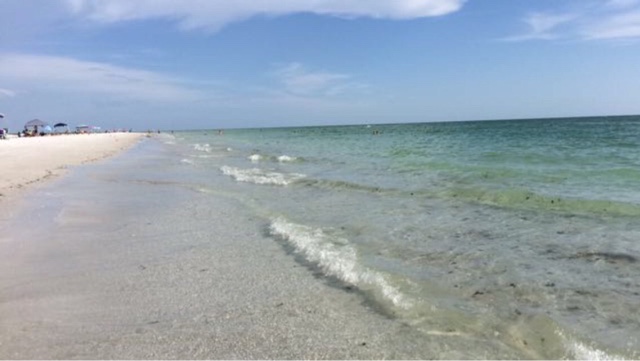 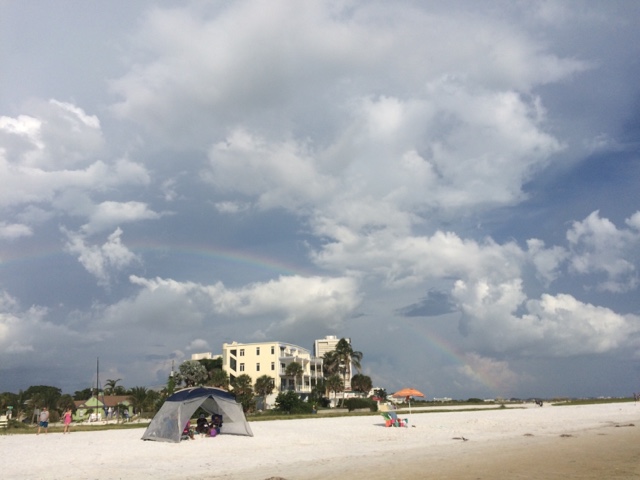 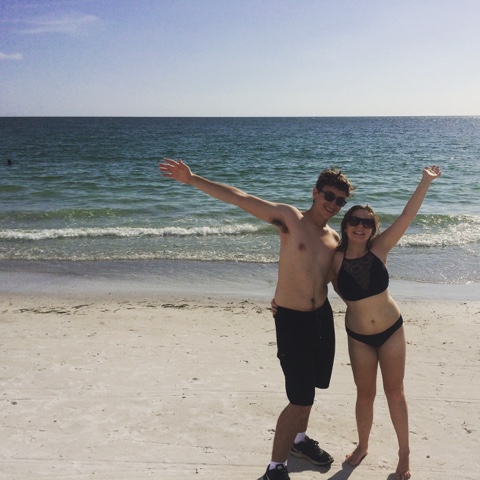 After we were done frolicking in the softer-than-soft sand and warm water, we left the beach (just as a few warning rumbles of thunder took over the sky) and headed back to our house rental. Not long after, we were engulfed in a torrential downpour that only tropical places like Florida can provide. But the sound of the rain on the windows was its own kind of magical, and J and I will most likely fall asleep earlier tonight after a long, hot, salty day.
xx
Steph