I think… I’ve only been camping twice. 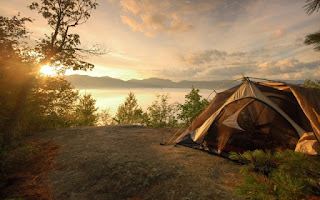 Once with my family around the 4th of July timeframe when I was like 8 years old…
And then another time a bit later when I was older with my cousin and her family (the same trip where I got red-lobster burnt XD).
Both experiences were somewhat similar, but also very different.
On the trip with my family, I remember sleeping in a huge tent, on the ground… But there was an air mattress inside. I remember it raining hard one night, and also waking up to a spider on my blankets. I remember waking up early and having to pee super badly, but the bathrooms on the campground were kinda creepy and a little bit far away… On my way there I splashed through the puddles left by the rain the night before, and on my way back, I saw the biggest praying mantis I think I’ve ever seen. Annnnd then my memories grow dim.
With my cousin, we were in VA, and we camped at a KOA (or was it KAO?) kinda near Lurray Caverns. Except, my cousins fam and I slept in a camper trailer, and had electricity and cleanish water XD. There was a mini golf course on the campsite, and a pool too. But, like always I remember the bugs being bad and having to suffer through a multitude of mosquito bites. The stars at night were amazing though.  And I’m pretty sure we had a fire going at one point with all the necessary s’mores ingredients.
I want to go camping again sometimes soon– though this time around, since I’ve tried both the tent and trailer method… I feel like I’d like the tent option better.. With an air mattress. Haha. Because as much as I like the comfort of a trailer, there’s something to be said for being close to the ground, that glorious sound of unzipping the tent to get in and out, the puzzle of setting it up, and having a thin barrier between you and Mother Nature’s wrath. Or beauty, depending on her mood.
That being said– any hard core campers out there? And do you have a favorite camping spot?
xoxo,
Steph
Pic creds: https://www.reuseit.com/images/content/Camping-Near-The-Lake-Background-Wallpaper.jpg
(If only I could have a camping experience as glamorous as Google’s!!)